The Azores Islands are known for their unparalleled beauty and biodiversity, adored by outdoor adventure enthusiasts and nature lovers alike. But what people may not know is that the Azores is also one of the fastest-growing whale watching destinations in the world. Located in the Atlantic Ocean between Portugal and North America, the Azores are a permanent home and natural point of passage to more than 20 different types of whale and dolphin species, making the islands one of the world’s largest whale sanctuaries. The Azores’ winning combination of unique volcanic origins, deep waters off the coast, and mild air and sea temperatures from the Gulf Stream make the archipelago the ideal location for visitors to come and spot a wide array of species on a whale watching adventure.

Sea life you can spot on a whale and dolphin watching excursion in the Azores, Portugal

Sperm Whales, Common Dolphins, Bottlenose Dolphins, Atlantic Spotted Dolphin and Risso’s Dolphins all call the Azores home year-round. Some other species also pass through the islands during certain seasons, including Pilot Whales and Striped Dolphins, which come around the spring months, and Blue Whales, Minke Whale, Fin Whales and Sei Whales, which pass through during their summer migration.

The Azores waters are also home to many other birds and animals. For instance, visitors to the islands can expect to encounter sea turtles, Manta rays, ocean sunfish, whale sharks and Cory’s shearwater, the most abundant seabird in the Azores (with a very distinct call!)

Best time of the year for a whale and dolphin watching excursion in the Azores, Portugal

Most people believe that whale and dolphin watching is only possible during the summer months, but this is a common misconception! Due to the Azores’ mild temperatures year-round and the large number of species that call the archipelago home, it’s possible to venture out on a whale and dolphin watching excursion and spot some exciting wildlife any time of the year. If you’re specifically interested in observing spotted dolphins, sperm whales, sei whales, bearded whales or fin whales, the summer is the best season for you to visit. Blue whales can be easily spotted at the end of winter, while spotted dolphins, striped dolphins, and pilot whales pass through during the spring months. No matter what season you choose to visit the Azores, you’ll always be able to spot some new friends at sea.

Are sightings guaranteed during a whale and dolphin watching excursion in the Azores, Portugal?

Since the Azores is home to a variety of both resident species and species that migrate through the islands at various times each year, visitors can expect to spot whales and dolphins 98% of the time they venture out to sea. In fact, the spotting rate in the Azores is so high that many tour operators will refund tickets if no dolphins or whales are spotted!

What you should know before your whale and dolphon watching excursion in the Azores, Portugal

Local tour operators and government agencies work together to ensure that the species of the Azores remain safeguarded by setting  guidelines and safety rules for all observers to follow.

While whale and dolphin watching, the following is prohibited:

Whether you are young in age or young at heart, and regardless if it is winter, spring, or summer, the Azores is the perfect destination for all adventurers who wish to experience the thrill of viewing the cetaceans of the Azores up-close on a whale-watching boat trip.

Now that we’ve given you a great introduction to these two types of oceanic adventures, we’ll further break down specific offerings that each of the islands offers, including both whale watching and dolphin watching. This way, you know exactly what to do based on where your visit takes you and which sea animal you are wanting to spot most.

Dolphin Watching in the Azores

While whale watching is most often spoken of, visitors mustn’t miss the equally thrilling adventure that is dolphin watching. In fact, dolphin watching sometimes isn’t just watching: Many tours in the Azores even give you the chance to get in the water with the sea creatures and actually swim with them! Imagine having the once in a lifetime opportunity to swim with Risso’s dolphins, bottlenose dolphins, Atlantic spotted dolphins, striped dolphins, rough-toothed dolphins, and many more — all of which are common to the Azores— in their natural habitat.

São Miguel, the largest of the Azores islands, offers visitors the opportunity to experience whale watching departing from historic and scenic Ponta Delgada harbor. If you’d especially like to spot blue or fin whales, São Miguel is your best bet. There are also the most tour operators located on this island, meaning you can have your pick among a multitude of different tour options, including different types of whale watching boats and vessels. Dolphin watching tours are also an option on Sao Miguel, so don’t forget that!

Terceira Island is known for its rich cultural roots as well as its amazing whale watching opportunities. Terceira is home to the official UNESCO Heritage Site, Angra do Heroísmo, which provides the perfect and awe-inspiring backdrop as you depart on your whale watching adventure! Imagine after getting to see myriad varieties of whales in their wild and natural habitats, coming back ashore and getting the chance to let yourself be carried away by the sights and sounds of this picturesque World Heritage Town. It’s a can’t lose scenario.

Faial Island has long been known to be one of Europe’s best destinations for whale watching. The Atlantic waters surrounding the island feature a wide range of whale species, including sperm whales, blue whales, fin whales, and more various times throughout the year. As well as hosting a wealth of whales, the charming capital town of Horta and its historic architecture will be sure to charm you just as much as the sea creatures. And don’t forget the dolphins while you are in Faial either, as local operators offer many dolphin watching excursions to delight you as well.

Pico is a fascinating island famous for many things, including its vast UNESCO-protected vineyards, which produce the Azores’ signature wine. Pico whale watching is also primo, with the island boasting an amazing Marine Protected Area known as Ilheus da Madalena (Islets of Madalena) that offers a literal playground for abundant marine life. Plan your whale watching tour right, and after getting a gander at the great whale, stop by a local Pico cafe or vineyard and enjoy a sip — or many — of some of that famed island wine. 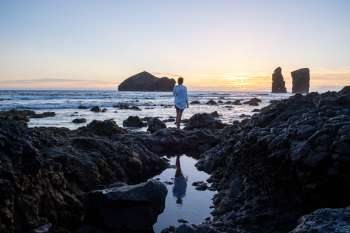 Includes round trip flights and accommodation your choice 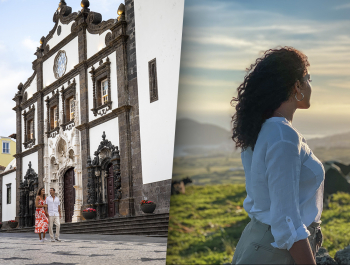 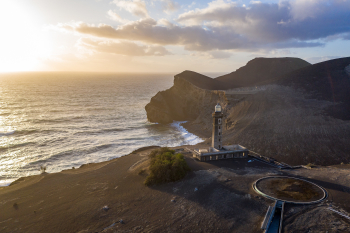 Includes round trip flights and accommodation of your choice.

Experience the beauty of Terceira with guided full-day hiking tours, plus your choice of 4-star hotel

Experience the Azores with this Pico Getaway! Includes flights and hotel.
Get $50 off your first trip!
Subscribe to our newsletter to get a $50 discount towards your next trip!
*Email is mandatory

Take $50 Off *
Your Next Vacation
Join our Travel Rewards program and receive $50 just for signing up! As a Travel Rewards Member, you'll receive exclusive offers and early access to special deals and sales.
or join with
Sign in with Facebook
Sign in with Google
* $25 valid on purchases made online only up to one month after the receipt of email. Remaining $25 reward can be applied towards the same booking or future travel.
This website uses cookies
We use Cookies to improve your experience while browsing. By continuing you agree to its use, as well as with the Terms and Conditions and Security and Privacy Policy.
Terms and Conditions
Privacy Policy