Birdwatching in Portugal: Witness Avians that Awe and Inspire

Are you an avid birdwatcher? If so, you may have already heard that Portugal birds are among the most beautiful and amazing to behold in the entire world. We must agree, and further expand upon this high praise by going into greater detail on the nation’s fast-growing popularity of admiring avians in Portugal.

Birdwatching Portugal is a surprisingly hot Google search phrase these days, and for good reason! Far beyond small garden birds in Portugal, birdwatching Lisbon is picking up steam, as well as Sagres birdwatching, and birdwatching Alentejo! Look at any Portugal bird guide worth its salt, and you will find a proverbial treasure trove of Portugal birds that are not only rare and beautiful, but are also intriguing to study and simply behold.

Now, let’s talk about one specific destination that might surprise you for being a paradise for birdwatching Portugal — a pristine island archipelago known as the Azores Islands. Why? For so many reasons — which we will get to — but bottom line is because birds in the Azores simply cannot be beaten.

For the avid bird identifier, Portugal is a no-brainer to visit for inspiration and epic birdwatching. However, Azores birdwatching is equally — if not more appealing — as this uniquely situated island archipelago located just off the coast of mainland Portugal is the host of myriad majestic and magical winged wonders.

Specifically, the Azores has reported close to 400 bird species spotted within its borders — an astounding amount for such a relatively small and more off the map locale. One of the greatest things about birdwatching in the Azores is that it is a less-explored avian admiring destination, which means less crowds of people and more peaceful places to truly get to experience Azores birds in unspoiled wilderness and their natural habitats — at peace and amid stillness and silence. Sounds like heaven, right?

The Perfect Combo: Under the Radar Locale and Rare Bird Species

Part of how the Azores has become host to such an astoundingly vast amount of birds is the fact that it enjoys a central position which means that several rare migratory species make the Azores a stop on their itineraries while on the move each season.

In fact, the Azores Bullfinch, known to be among the rarest birds in all of Europe, is often found on the island of São Miguel, Azores. The gorgeous and tucked away island archipelago is also home to several of the largest colonies of Cory’s Shearwater and Roseate Terns. Also among the Azores birds to set on your must-see list, the classic favorite: the Atlantic Canary! And that is just to name a few.

What Season Is Best for Birdwatching?

Although anytime is an excellent time to visit the Azores — and Azores birds can be seen year-round — many people consider that there is indeed a time of year that is ideal for birdwatching Azores. According to popular opinion, the absolute best time of year to travel to see the Azores' birds would be during the beautiful months of the spring and fall. The reason for this is that this is the time of year when the birds are migrating and nesting.

Azores Birdwatching: An Intriguing Activity for All

We have even more great news for you, as Azores birdwatching is not only an activity limited to enthusiasts or experts. It's true! The Azores has such a wide appeal that it has something to offer everyone, and birdwatching Azores expeditions are accessible for not only avian pros, but also for the beginner birdwatcher simply looking to enjoy the outdoors and learn a bit more about the long-revered pastime.

And whether you fall into the birdwatching novice or expert avian extraordinaire category, an official birdwatching Azores tour led by an expert local guide cannot be recommended highly enough. These experts can regale you with all of the facts and point out everything you ever wanted to know about all things Azores birds, making for a memorable birdwatching Portugal trip that will be the envy of all your peers as you brag about it upon your return home.

Clearly, there is so much to see… so, you must be wondering where to start? Good question…

Birds in Azores: Top Spots to Spot Them

In our humble opinion, São Miguel Island is a prime spot to start your Azores' birds expeditions, as you will have the best chance of catching an eyeful of the Azores' endemic species here (Graciosa Island also is home to many endemic species). After perusing the beautiful winged beings on this largest island of the Azores archipelago, you can head further afield to the lush island of Terceira.

While on Terceira, keep your eyes peeled especially for gulls and waders, of which the island is particularly known for hosting. Also to not be missed are the islands of Flores, which hosts its own cornucopia of Azores birds, as well as the island of Corvo for spotting American Passerines. Honestly, you can’t go wrong no matter which island you ultimately choose — if not all of them — as each exotic island has an abundance of stunning sights — and awesome avians — to keep you more than entertained, awed, and inspired while on your Azores vacation.

Birds in Azores: Top Spots to Spot Them

In our humble opinion, São Miguel Island is a prime spot to start your Azores' birds expeditions, as you will have the best chance of catching an eyeful of Azores' endemic species here (Graciosa Island also is home to many endemic species). After perusing the beautiful winged beings on this largest island of the Azores archipelago, you can head further afield to the lush island of Terceira.

But more on that later, now back to stunning São Miguel and the best spots to spot birds. Azores Bullfinch is known to find their favorite hideouts in the area of Nordeste, while Wilson's Snipe and Snow Bunting tend to gravitate to the Planalto dos Graminhais region. Those bird watchers looking for waders and ducks should head to Lagoa das Furnas for a chance to spot their hearts' desires, and then after they have seen their fair share of those fowls, the next stop could be the lagoons of Lagoa das Sete Cidades, where more waterbirds and wildfowl will await. Perhaps the most well-known spot on Sao Miguel is the island's famed Ponta Delgada harbour, which is also a great bird watching locale, particularly for seagulls, as well as herons and waders.

Terceira Island is known for its vagrants, and birdwatching here is among the best in the Azores. In particular, Praia da Vitória boasts a good amount of vagrants. Some specific types you might see include: Nearctic ducks (like American Wigeon, Blue-winged Teal and Ring-necked Duck), and waders (like White-rumped Sandpiper, Pectoral Sandpiper, Semipalmed Plover, Spotted Sandpiper or Lesser Yellowlegs).

If  you want to catch a glimpse of vagrant waterbirds, head to Cabo da Praia. Then, try your luck at Praia da Vitoria harbour, a known sight for sightings of vagrant gull species, such as Mediterranean Gull, Laughing Gull and Glaucous Gull. But that's not all! We could keep naming the species you could spot for hours, but just to name a few: Be on the lookout for Bufflehead, Double-crested Cormorant, Yellow-crowned Night Heron, Glossy Ibis, American Bittern, Wilson’s Phalarope, Red-footed Falcon or Belted Kingfisher. And we saved perhaps the primo bird watching spot on Terceira for last: Terceira island Natural Park, which is considered to be the perfect locale for birdwatching enthusiasts on the island.

One of the least visited islands in the Azores, Graciosa surprises many with its vast opportunities for birdwatching. Avian enthusiasts will not be disappointed when travelling to this Azores haven, as awaiting their discovery include an abundance of beautiful birds, many of which are similar resident birds to the other Azores Islands, including: Common Buzzard, Wood Pigeon, Grey Wagtail, Blackbird, Blackcap, European Robin, Common Starling, Chaffinch and Island Canary. And that is just to name a few!

Thanks to Graciosa´s craggy coastline, especially the area nearby Santa Cruz da Graciosa, birdwatchers will find exciting species that love this type of landscape in particular, such as egrets, waders, and gulls. If winter is the season that you will be visiting Graciosa, be sure and stop by Serra Branca, as Snow Bunting are known to make their homes here during the winter months each year.

Also to not be missed are the islands of Flores, which hosts its own cornucopia of Azores birds, as well as the island of Corvo for spotting American Passerines. Honestly, you can’t go wrong no matter which island you ultimately choose — if not all of them — as each exotic island has an abundance of stunning sights — and awesome avians — to keep you more than entertained, awed, and inspired while on your Azores vacation.

We feel we would be remiss to not mention that the Azores offers much more than just birdwatching opportunities. So, when you are taking a break from beholding beautiful Azores birds, you can rest assured that there are plenty of other equally exciting and thrilling activities to inspire the adventurer within you, including hiking, whale watching, canoeing and kayaking, golfing, biking, fishing, paragliding, and much, much more.

With travel getting back into full swing, Azores' prices have never been better! And with excellent new and affordable direct flight offerings from the U.S, Canada, and the UK, there is simply no better time to book your Azores adventure than right now. We are here to help you in any planning and logistics configuring you need in order to make your Azores birdwatching — and beyond — vacation getaway the trip of a lifetime. 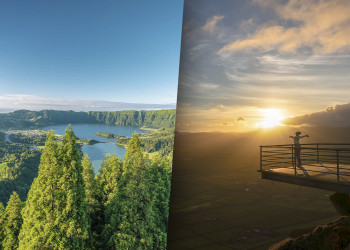 Enjoy sunny skies and visit the beautiful and popular islands of São Miguel and Terceira.

Enjoy a magical sunset in Terceira Island with our brand-new travel deal. 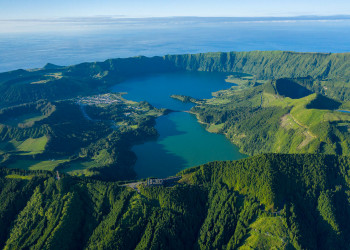 Experience the authenticity of São Miguel Island with this flight+hotel package. 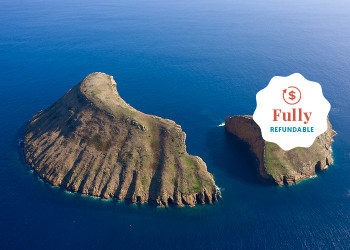 The Azores | Escape to Terceira

Includes round trip flights, accommodation at a 4 or 5-star hotel, transfers and a tour. 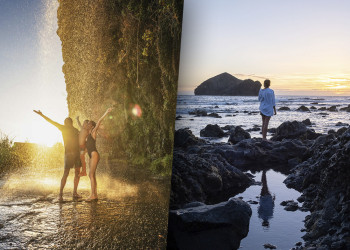 Summer in Portugal | The Azores & Madeira

Discover these two beautiful archipelagos situated in the middle of the Atlantic!

Explore Portugal with this exclusive package.
Get $50 off your first trip!
Subscribe to our newsletter to get a $50 discount towards your next trip!
*Email is mandatory